One year ago， at a seminar in Manila， Philippines， a fifty-year-old lady suddenly came to Prof. Xu Kecheng， her face was familiar， but Prof. Xu could not recall which kind of cancer she had(Figure 9). She said， “Professor Xu， you are my great benefactor， do you think that I am still sick？” I recognized that she was a patient with metastatic renal carcinoma， her name was Rus. Five years ago she had surgery. Three years ago， the patient came to our hospital with bone metastasis. For this kind of progressive renal cancer， chemotherapy and radiotherapy do not work at all. There are ten reports showing that patients with a 5-year survival rate vary from 0-13%. Prof. Xu treated her with Combined Immunotherapy for Cancer (CIC)， which she unexpectedly greatly benefited from. Prof. Xu read her latest CT films done in the Philippines and no lesions could be seen. She gave Prof. Xu  two beer bottles with flowers that she herself had painted on as gifts. According to her family's custom， these flowers on beer bottle represent their cordial respects and gratitude. She was afraid Prof. Xu would not accept them， saying that she was too poor to send him valuables， she also did not dare send him valuables as she knew there is a rule in our hospital that all staffs are not allowed to accept gifts from patients. These were not valuables， but a token of her regards， so Prof. Xu accepted. Although Prof. Xu cannot fully understand the true meaning of the painting， he brought back these two beer bottles and put them on the bookcase in his office where he can see them everyday.

On November 19， 2011， the vice president Mr. Binay made an appointment with Prof. Xu in Manila. Mrs. Rus heard that Mr. Binay wanted to meet Prof. Xu， she came to the hotel that he stayed in early that morning， following Prof. Xu to go to the Vice Presidential Palace. Mr. Binay was very excited after listening to Prof. Xu&rsquo;s presentation and had his photo taken with Mrs. Rus and her sister.

Several years have passed， Rus is still alive and healthy. Every time Professor Xu goes to the Philippines， she always accompanies him， and shares her anti-cancer experience with those cancer patients who still live in great misery. Rus is sharing her personal anti-cancer experience with others 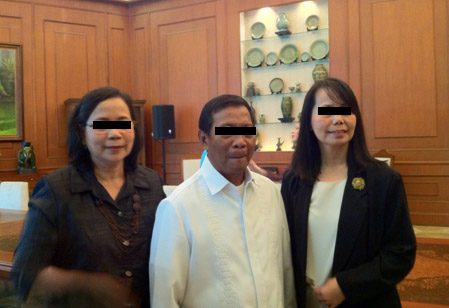 Vice President of the Philippines Binay received Ms. Rus(Left) and her younger sister 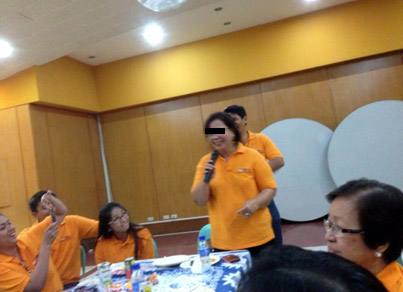 Those patients with metastatic kidney cancer who have undergone surgery， chemotherapy and radiotherapy have poor prognosis and their median survival period is less than one year. However， this patient has disease-free survived for 6 years， for which is closely related to immunotherapy.

Cancer cell is heterogeneous， which means cancer gene expression varies and it is very unstable during the differentiation. In other words， cancer cells change day by day. Immunotherapy shall be powerful and adaptable to fight cancer. The immunological measures used shall vary with cancer cells.

Based on the above understanding， Fuda Cancer Hospital combine a variety of immunological measures， which is so-called combined immunotherapy (CIC)， including CIK， DC， T cell transfusion therapy， cytokines injection and non-specific immunostimulating therapy. This would be like fighting a battle， the Army， Navy， Air Force， and even the police (immune cells and cytokines)， intelligence agent (DC cells) are indispensable. For immune cells， it shall not only increase their number， but also take measures (non-specific therapy) to stimulate their enthusiasm， so that they dare to make a frontal attack on cancer cells. Of course， in some patients， before they receive one or more immunological measures， some special pre-tests shall be carried out to understand individual differences， on which personalized treatment will be made.

According to Rus&rsquo;s specific condition， she was recommended to undergo CIC long-term non-specific immune therapy， focusing on mobilizing the initiative of innate anti-cancer ability to inhibit or even eliminate cancer cells (apoptosis)， so she manage to obtain long-term survival. It is a great success， which can be called a miracle！